After a scenic tour we managed to find the fleamarket where the good folk of \Joshua Generation for Jesus had already set up a canopy and stand for our outreach.  So we unloaded all our goodies - tea bags, Hobnobs, balloons and hung our banner up.

We were soon in business with children crowding around excited about the balloons with their parents and grandparents blown away that we were giving away 'free' tea and biscuits!

We struck up some great conversations and were even able to pray with some of the folk who came by.

Although it was a little overcast at the start when the sun burned through the clouds it was extremely hot and sunny.

We gave out lots of invitations to the families to come along to the fun day and soccer school that is planned for Labour Day as well as invitations to the services here at the church.  Some folk may even come along to a service we are holding right up on the north side of 'rhe Rez' later in our time here as we found out that the people at the market travel some distance to it from all over the reservation.

We left after a number of hours and had a Subway before heading back to unpack our boxes and prep for Sunday until Tuesday.  We had a 'little' rest and then met up with the church folk for devotions and a Navajo Taco meal followed by rehearsal of dramas and songs.

Finally at about 8.30pm we made our first visit to Walmart - only short as we were pretty worn out to say the least. 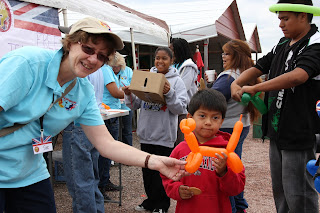