We started the day with devotions and prayer.  We prayed for Chris Govus who was feeling a bit breathless this morning and for our last service here at Joshua Generation.

It was a great service.  We did two dramas, Margaret shared testimony, Steve, Colette and Julie led worship and Julie sang a solo.  Dave preached up a storm!!  It was really great to see a lot of folk come along today and for opportunity to pray for a few at the end.

What really blew us away was a film that they had made for us about our mission!  Without knowing it Peewee had taken photos and film on her phone and they put it together with music to say 'Well done and a thank you!'  It brought tears to our eyes.  It was very precious.

We set out with Dennis and Peewee north to St Michael on the Rez to meet up with Herb Hutchinson (one of Bill Haley's Comets) who is now a Bishop and has a mission on the Rez.  They hosted for lunch of Navajo Tacos.  It was really good to share some time with him and his wife before our final goodbyes with Dennis and Peewee.  We set off cross country to Phoenix arriving at almost 11.00pm Arizona time, midnight New Mexico time.  Think we are all pretty exhausted!  But we can hopefully recharge our batteries  a bit tomorrow before our flight home on Tuesday.

Thank you for all your prayers and support.  We have had some amazing answers to prayer - looking forward to coming home to share it with the folks back at TCC.
Posted by Beacon Mission at 23:39 3 comments: 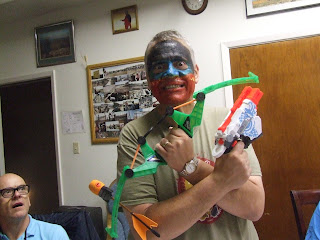 Chris was face-painted by Ty (in picture) & co. in prep for Nerf Wars! 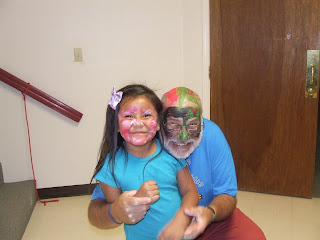 Travelling back to Gallup

Two days into one!

Well that's how it feels right now.  We had to be up at 3.00am today hence no blog last night.  Sorry to all our regular followers.

Yesterday began early too, we were on radio being interviewed and Steve, Mark, Julie and Colette also sang the song that they had written earlier in the year at the TCC worship day.  We then left Farmington for Gallup taking a different route (one of the Indian routes recommended to us).  It was a really stunning route across country.

We got back to Gallup, had lunch at Wendy's, freshened up back at the church and then went to the Indian Hospital to sing in the foyer and then on the next level.  It was a different experience from the Christian hospital but very worthwhile, we felt that they had really appreciated it and will definitely try to come again on a return visit.

From there we split into several groups, one to Walmart, one back at church to sort our things out and one to check out the cafe in town to see if we can go in to do music again.

Sadly the cafe was shut due to a burst water pipe so we had to adjust our plans.  This was just as well as the proposed Nerf gun wars with the Joshua Generation and firework show turned out to be more of an event than we expected when several church families arrived with Nerf guns.  And so we really went to town with face paints and had a fantastic evening.  It wasn't a very late night but considering we needed to leave the church at 4.00am for the Navajo Nation Fair we were pretty shattered!

So today we left Gallup at 4.00am in the dark heading north into Arizona on the Rez to Window Rock.  It was hard to find our spot to set up our stand along the parade route.  There were hundreds of people lining the route and sleeping in their cars or just by the roadside.  Cars everywhere several deep with no space between.  We had to be there early as the road was due to close for the parade.  Eventually Peewee got us a place and we drove the cars off road and we were able to set up our tea stand.

We made tea and balloons for the people around us.  The kids were all over us.  Then when the parade eventually started we took a break to watch it go by.

The parade was amazing!  It went on for a vey long time.  We even got a mention several times on loudspeakers from the parade from people that had met us and knew about us!  We were the only 'Anglo' people there.  It was awesome.

After that we took everything down and headed into the fairground where there was traditional Navajo dancing, Fry Bread contest, art and crafts,  food stalls, rides, stands, a pow pow and much more.  It was very hot though and so we came away at 3.00pm pretty exhausted.

Back in Gallup we set about packing up our stuff as tomorrow after the morning service we head off to Phoenix on the first leg of our journey home.  It feels as if the time has flown by but on the other hand it also feels as if we have been here forever.  And even now new opportunities are opening up and fresh ideas for outreach are coming to us.

We will be taking part in the service tomorrow and will be on the Rez for lunch hosted by one of Bill Haley's Comets!  Looking forward to that!
Posted by Beacon Mission at 19:47 1 comment: 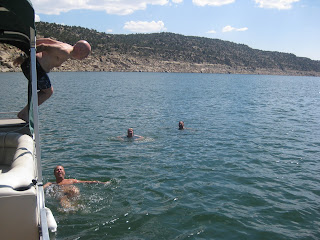